Petrol, Diesel Price Today: Among metros, the rates are the lowest in Delhi on account of lower taxes

Domestic fuel prices were kept unchanged at existing levels on Wednesday. While the diesel price was left unchanged for a third straight day, the status quo on petrol rates followed five consecutive hikes. Currently, oil marketing companies such as state-run Indian Oil Corporation review the domestic prices of petrol and diesel on a daily basis. Any changes, based on the international rates of crude oil and rupee-dollar foreign exchange, are implemented at the fuel stations with effect from 6 am. (Also read: How to find out latest petrol and diesel rates on your mobile)

With effect from 6 am on Wednesday, November 27, the petrol price was at Rs. 74.76 per litre and the diesel rate at Rs. 65.73 per litre in Delhi, according to notifications from Indian Oil Corporation (IOC). The price of petrol had been hiked by 56 paise per litre in the national capital in the past five days. 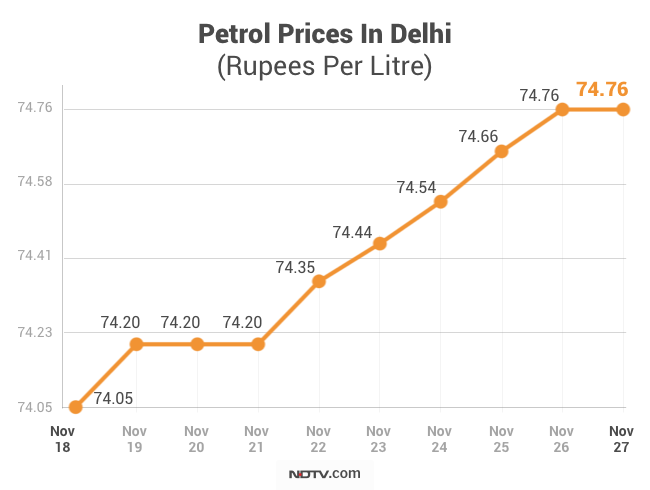 Among metros, the petrol and diesel prices are the lowest in Delhi on account of lower taxes.

In Mumbai, the petrol and diesel prices were Rs. 80.42 per litre and 68.94 per litre respectively, according to Indian Oil, the country’s largest fuel retailer.

Here are the prices of petrol and diesel (in rupees per litre) in Delhi, Mumbai, Kolkata and Chennai on Wednesday:

Brent crude – the global benchmark for crude oil – was at $62.98 per barrel in the international market on Tuesday.

The rupee edged higher to 71.40 against the dollar in early trade on Wednesday. It had ended at 71.50 against the greenback the previous day.