Stocks tumbled Tuesday after an unexpectedly sharp contraction in the U.S. services sector and a fresh downgrade in the financial sector.

Within the first five minutes of trading, the Dow Jones Industrial Average was down about 150 points and just kept going. In intraday trading, the Dow was off more than 12 percent from the closing high of 14164.53 set on Oct. 9. The S&P 500 index and the Nasdaq also declined. 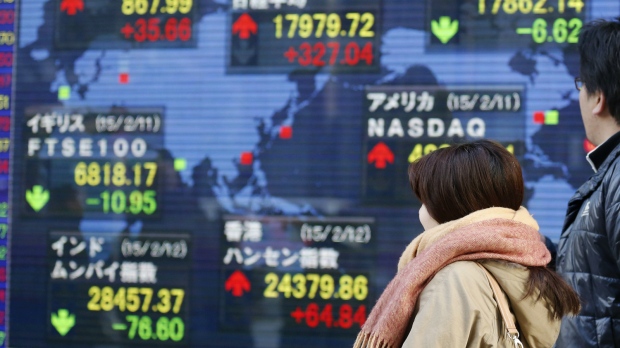 European shares continued to slide for a second day after a report that service-sector growth in the euro zone fell to a four-and-a-half-year low in January, fueling concerns that the U.S. slowdown may be spilling over into Europe.

Spain in particular took a hit, recording the its slowest ever rate of growth in the service sector. “The sky is tumbling in on the Spanish services sector,” Bear Stearns analysts wrote in a note.

The Institute for Supply Management reported Tuesday that itsnonmanufacturing index, which measures the performance of the U.S. services sector, plunged to 41.9 from 54.4 in December. Economists had expected a more modest drop to 53. A reading below 50 indicates contraction. This was the lowest reading since October 2001, when the Sept. 11 attacks caused the U.S. to slip into a mild recession.

The services sector represents about 80 percent of U.S. economic activity, including businesses such as banks, airlines, hotels and restaurants. The ISM report underscored concerns that the fallout from the housing-sector slump is spreading to the broader economy.

Goldman Sachs shares slipped after Oppenheimer downgraded its rating on the stock to “perform” from “outperform,” citing valuation and other factors.

On Monday, downgrades on credit-card providers such as American Express and a slew of other financials dragged down the market. Analysts are growing increasingly concerned that consumers are falling behind on their loan payments.

Investors also sold technology stocks, which are seen as particularly vulnerable to a downturn in business and consumer spending. Shares of business-software maker Oracledeclined as did blue chips Microsoft and Intel. Telecom-service providers AT&T and Verizon were among the biggest drags on the Dow.

Apple was among the few stocks pushing into the green after the company introduced new models iPods and iPhones with double the memory of previous versions.

Yahoo shares were flat after Banc of America cut its rating on the stock to “neutral” from “buy” and raised its price target to $31 from $26. UBS and Citigroup also raised their targets on the stock, to $34 and $31, respectively.

In earnings news, oil giant BP reported that fourth-quarter replacement cost (RC), which strips out unrealized gains on fuel inventories, fell 24 percent to $2.97 billion. But BP’s shares gained 1.8 percent in premarket trading after the company said it favored returning money to shareholders via dividends, rather than share buybacks.

The parent of the New York Stock Exchange, trans-Atlantic NYSE-Euronext , said its profit rose to $156 million, or 59 cents a share, compared with net income of $45 million, or 29 cents per share in the year-ago period — before the merger with Euronext.

Power company Duke Energy posted earnings of 27 cents per share and beat analyst estimates. The company also provided an outlook for 2008 that was above expectations.

The net loss included acquisition, divestiture, litigation and restructuring-related charges and amortization expense (pre-tax) of $939 million, or 55 per share, the company said.

Politics will take center stage on this Super Tuesday, as more than 20 states hold primaries for the presidential election.